Developing a website such as SDk and the magazine it hosts takes time. That's why we think contributors and others interested in what we are doing deserve to be kept informed on our progress. This page has been designed to do exactly that: to keep you up-to-date as to where we are. We're pleased to have you with us.

Windows on a world of economic decay: Lisa Furness exhibiting in BerlinLatest News 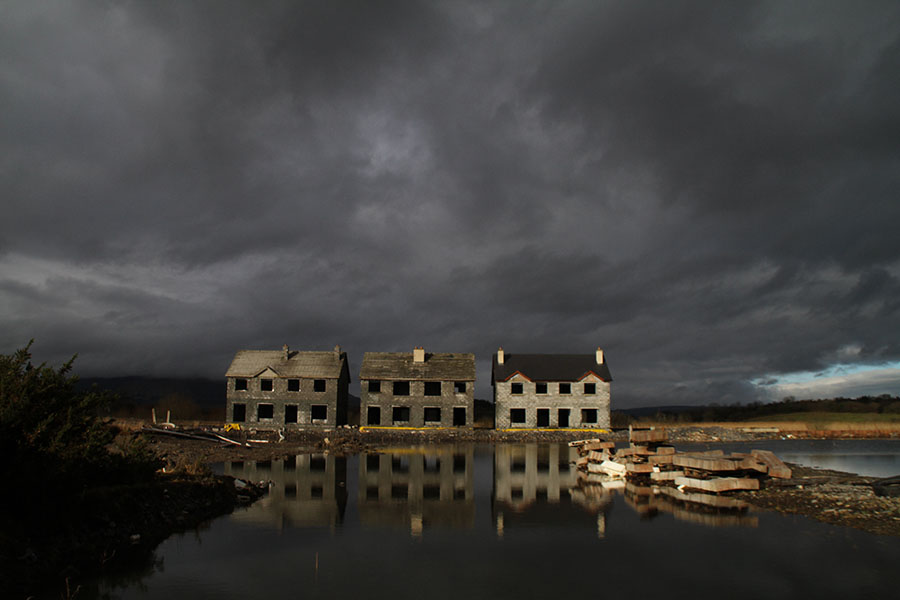 Lisa Furness specialises in depicting scenes of the urban environment, and that is why she is the featured photographer in SomethingDark issue 3 the built environment and urban decay. So it was no surprise that when we organised our SomethingDark-in-Berlin exhibition Furness provided an important contribution in the form of six fine-art prints of her work in Ireland, Portugal, Slovenia, and Bristol (England).

However, unlike the other invited exhibitors  with the exception of SDk03 featured artist, Australian painter Ros Paton  we also invited Furness to provide written artist statements for her images. We requested this because of what we regard as the importance of her work in documenting the tangible evidence of systemic politicaleconomic failure in much of the western world.

With our exhibition having less than one more month to run, we are pleased to provide here for SDk Latest News the text that Furness provided for the gallery walls in Berlin to accompany her pictures...Read more

Travel photographer and SDk03 contributor David Hicks was the subject of our first contributor focus article; the second in this series looks at the recent work of Lisa Furness. Weve always liked Furness work for its portrayal of the built environment and its suggestiveness regarding the human responsibility involved in urban decay  thats why shes previously had an item in our Latest News section, and why she was our featured photographer for SDk03.

Furness travels a great deal to take her pictures, but the resulting images cannot be categorised as travel photography: her camera captures the devastating consequences of a corrupt and out-of-control financial system and the economic and human disasters that flow from this system. These issues are not simply economic  they are ultimately political, and thus does Furness provide us with a tacit commentary on the political decision-making processes that allow these economic and human disasters to occur, and then to reoccur, and to reoccur yet again.

In October 2012 Furness embarked on an extended period of travel...Read more

As we pointed out in the Editorial for SDk03, travel photography isnt a genre that normally suggests associations with SomethingDark.

If travel photography conjures visions of self-indulgent holiday happy snaps, or perhaps of a commercial, biscuit-tin-lid style of scenery, then the work of David Hicks will provide a much-needed breath of fresh air. It certainly did for us, and we were delighted when the English photographer agreed to provide us with the images we wanted from his Scooters of Taipei series, and also to write a short article about the city of Taipei and its populations use of scooters as a practical means of urban transport (SDk03, pp. 1667).

Hicks has visited well over seventy countries, and, more than merely photographing what he encounters on his travels, he seeks out and uncannily captures the essence of a place and its people. He concentrates on everyday life, which more often than not is everyday life on the streets of the worlds cities...Read more

The visitor steps into darkness and immediately falls into an eerie soundscape. Haunting images of a cold city viewed as if from a high hilltop at the citys edge shimmer on a large screen; on an opposite wall, on another large screen, is the unmoving image of a young man lying awake in bed, mobile phone on the pillow next to his head. Then a young woman and mobile phone appear in identical repose. Two small screens mounted on the gallery floor to one side of both big screens play echos of the same film.

The city is Sarajevo; the young man rises before dawn every morning to deliver newspapers from apartment door to apartment door, travelling by bicycle and foot through the citys dark, frosty, pre-dawn atmosphere, through snow-covered streets and up the stairs of tall apartment buildings. What, then, of the young woman? She is the young mans double; she mimics his daily routine, possibly his life. Both characters and their actions are taken from real life and are known to the artist who created this work, ejla Kamerić: the young woman is an aspiring actress and she emulates the young mans activities. The view of the city from on high is a snipers view of Sarajevo, and the imagery and soundtrack are all the more disturbing when the visitor bears in mind the citys recent history....Read more

Lisa Furness is our featured photographer for SomethingDark no. 3, and in this short item for SDk Latest News, she provides a preview of the ambitious project in Spain that she will commence in the new year. She has just returned from a recce visit to Barcelona, where she shot a short pilot series of images at a squat in central Barcelona known as La Pansa. ...Read more

An extreme law, pornography and another tabloid debacleLatest News

Possession and Control: A photographic story of identity lost and creative progressionLatest News

Dutch photographer Jenny Boot has produced a new series of work that conjures scenes of an eerie beauty. The series, Possession and Control, revisits some of her earlier influences  thematically fetishistic, and aesthetically reminiscent of the Blue series  but that also showcases an eye honed in her later fashion work.

According to Jenny, the series tells a story of possession and the loss of identity, as if something beyond humanity is controlling and leading us. Surrendering to this control is a concept she finds reassuring, and it can, she says, be exercised (or depicted) in science fiction, and also in BDSM-inspired imagery....Read more

Steve Keen, a professor of economics and finance at the University of Western Sydney and one of only a handful of economists to predict the global financial crisis of 200708, tangibly confounded conventional thinking on the economy in an interview broadcast on BBC Radio 4 last Monday night, 4 June. The interview, conducted before an audience at the London School of Economics, appeared to leave the BBC, interview host Paul Mason (the economics editor for BBC 2 televisions Newsnight programme), and some members of the audience struggling to grasp Keens comprehensive demolition of mainstream economic theory.

Introduced as controversial, radical, and of having acquired a cult following, Keen explained how neoclassical (or mainstream) economists responsible for the dominant theories that govern our national economies ignore the role of money, banks and debt in their modelling. He convincingly argued that ignoring these three factors cannot produce realistic models of our economic system, which explains why most economists were blind to even the potential of a financial crisis such as the one triggered by the Lehman Brothers collapse in 2008....Read more

Brunels pro-vice-chancellor for strategy, development and external relations, Professor Dany Nobus, opened the conference with an address that set an appropriately relaxed but relevant tone  he said Brunel University was a fittingly innovative venue for such a conference although his own work on necrophilia and bestiality, he assured the audience, were not necessarily the ...Read more

Eroticon 2012, a one-day conference held in Bristol on Saturday 3 March, was billed as the UKs first conference for erotica writers and sex bloggers. Five blocks of sessions, panels and workshops ran from 09:30 to 17:00.

The highlights for us were the first and last panel sessions, Identity, ethics and sex blogging, and Sex and the media. Zoe Margolis, founder of the personal sex blog Girl With a One Track Mind (2004) and author of the book of the same title (2006), stood out in both panels as a passionate and committed advocate of a concerted, coordinated effort to counter regressive  and sometimes oppressive  social attitudes and those institutions, such as mainstream media, that support and promote them. ...Read more